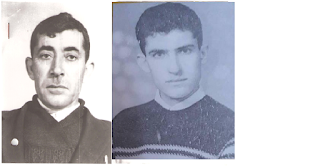 (Edit: Photo has been updated)

(Edit (22/08/2017): Please see important note at the bottom for a comment by a relative of the people mentioned)

In connection to my article that was based on Ulus Irkad’s article called “How did they divide us and how did they divide our country?” published on these pages on the 30th of July 2017, a relative of M. mentioned in the article contacted me saying that his relative had nothing to do with the killing of a Turkish Cypriot and that his relative `was another victim of the psychological war unleashed by TMT.` He said:
“He was not afraid of them or their rising power over the masses. On March 7, 1964, he was brutally murdered and his dead body was paraded in the streets of Mouttalos and Ktima. He was made an example, much like all the other innocent Turkish Cypriots you mention in your article that seemed to defy the TMT power. They did the worst they could for him and then tried to put the blame on him. I appreciate it that you specifically explained that this part of the article was only “claims” by others (“Υπήρχαν επίσης ισχυρισμοί”); this shows a quality of character by my standards. But yet, since this is not true, I believe it could have not be mentioned. These FALSE allegations only keep the people apart and do not allow for a sincere reunification of people and country…. It hurts to see the propaganda of the people that brutally slaughtered him, keep circulating decades after he has been put to rest…`
I have spoken with Ulus Irkad and also with some others from Paphos area. One of my readers also has said that M. had nothing to do with killing or shooting at a Turkish Cypriot but that the blame of shooting was put on M. of a Turkish Cypriot who had been shot accidentally by a friend of this Turkish Cypriot and that there were a lot of provocations those days as the article gives details about. That this incident of the wounded Turkish Cypriot by his friend was used for claiming that M. had shot a Turkish Cypriot in order to create a provocation and kill M.
I hereby correct this article and apologize to the relative of M. and thank him for giving us the chance to clarify and correct the facts.

(*) Article published in the POLITIS newspaper on the 30th of July 2017, Sunday.
The article was published in Turkish in Yenichagh newspaper and also on my pages in the Yenidüzen newspaper on the 8th of June 2017… The link to the article:
http://www.yeniduzen.com/nasil-bolunduk-ve-nasil-bolduler-10790yy.htm
Posted by Sevgul Uludag at 3:40 PM