Tales of Cyprus from another time: When we had not been divided… (Part A) 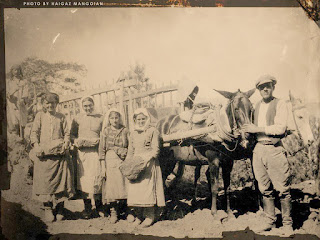 Tales of Cyprus from another time: When we had not been divided… (Part A)

Constantinos Emmanuelle who created `Tales of Cyprus` on the internet has compiled stories from our good friends Huseyin Halil and Christalla Avgousti who have been going around the island, compiling stories from our past on RIK2 in their wonderful programme called `Under the Same Sky`… Constantinos Emmanuel says:
`The following transcripts are taken from video interviews conducted by my friend Huseyin Halil for RIK2. Huseyin and his film crew travelled around the island interviewing elderly Greek and Turkish Cypriots to find out how the two communities co-existed before 1950. I am grateful to have been allowed permission to translate some of these interviews into English for Tales of Cyprus.
Needless to say, I am not surprised to hear the heartfelt confessions of these elderly Cypriots who recall a time of bliss and unity. The one common and resounding 'truth' revealed by each person was that there was once a time in Cyprus when Muslims and Christians co-existed without malice, prejudice or discrimination. "We were like brothers," is a reoccurring statement.
Anyway, enough from me – I'll let you read these living memories for yourself.
(Please note: The word Turk or Turkish in these transcripts refers to Cypriots who are Muslim).

OURANIA PETROU PELOPITHA FROM ANOGYRA VILLAGE, LIMASSOL.
I remember when Afet was getting married and she chose my sister Vasiliki to be her 'koumera' (maid of honour). On the day of her wedding she was bragging to the whole village that it was the Christian girls who dressed her. We were so close, so close. It pains me to think about those days; such a shame.

ANTHOULLA LOUROUTSATI FROM LURUCINA VILLAGE, NICOSIA.
When I was a child we played with all the children in the neighbourhood. Not one person would care or distinguish whether you were Muslim or Christian. It was never discussed. As far as we were concerned, we were all the same. Everyone spoke Greek you see. After school we worked in the fields together, I would sew and embroider with the Turkish women. My friend Ayse would bring her machine to my house. We got along extremely well.

NICHOLAS HADIGIVANAKIS – AKAKI VILLAGE, NICOSIA.
Don't believe what anyone says - we didn't have any problems with the Turks. We lived together, we worked together, and we celebrated together. We were like brothers. I remember the Hoja in the next village had a general store and everybody would come from all around to shop there. Everybody. I'm waiting and I'm praying for the day when we can all live together once again; the way it used to be.

TROFAS IROTHOTOU – LEFKE VILLAGE, NICOSIA.
I remember Enver son of Naim. We were together from sixteen years old working for Yianni the painter. Enver's father had an orange grove and once a week Enver would bring me a sack of oranges. At the market you would pay two shillings for sack this size and here was my friend Enver giving me one sack every week. We loved and cared for each other very much. We didn't have any problems with the Turks in the village. At the coffee houses we were always together. We played cards together, mupa (football) together, baseball – whatever it was we were always together. I feel like crying when I think about it because actually we didn't have a problem.

NIKOS KONSTANTINOU - AMARGETI VILLAGE – PAPHOS.
Honestly the only trouble I can remember was when one of our Greek girls in the village fell in love with a Turkish boy. The problem was that this girl was already married but did not like her husband so she ran off with the Turkish boy. After a few stones were thrown things settled down and the girl eventually went on to marry the Turkish boy and had a family. That was the only incident that occurred in our village that I can remember. Of course we are talking before 1953.

CHRISANTHOS XENOFONDOS - AMARGETI VILLAGE – PAPHOS.
By luck I was born in a house opposite a little orphaned Turkish girl who was the same age as me. We played together every day. I would go to her house and she would come to my house. We played together, every day until we were six years old. The point I'm making is that we were allowed to be together. My father always worked alongside the Turks in the village.

CHRYSTOTHOLOS LOIZOU - AMARGETI VILLAGE – PAPHOS.
Five, six Turkish boys that I knew – we played together. They would come to my house and I would go to their house. My father was a farmer, we were quite poor and these boys would come and help us with threshing and whatever was required. My mother would always arrive with something hot to feed us all in the fields.

ANDREAS KAIZER - AMARGETI VILLAGE – PAPHOS.
Our church and the Tzami (mosque) were opposite each other. When the Turks were celebrating Bayrami the school children and the people at the kafenion would go over to wish them a good Bayrami. When it was our Easter they would come over to us to wish us a 'kalo paska' (Good Easter) and we would give them flaounes and sweets. We lived together peacefully and we worked together peacefully. We strived to help each other with everything; with the flour milling; with the threshing; with the grape picking; whatever needed to be done. Religion didn't come into it. We went to church they went to the mosque. I remember on Good Friday the Turks in the village would line the streets to bear witness to the procession of the Epitaphios (Επιτάφιος). There was respect for one another and our own religious rites.

ANNA KATSOURA - ANGLISIDES VILLAGE – LARNACA.
We went to each other's wedding. We would loan each other tables and chairs for the reception and helped with the food and drink. We danced and sang together all night and then we even slept all together. Doesn't that sound nice?

SOPHIA MICHALI - ANGLISIDES VILLAGE – LARNACA.
All the neighbours around us were Turkish. But we didn't refer to them as Turkish back them. There was Yusef over there, Huseyin across the road. We didn't distinguish them as Turkish. We were all the same. They had Muslim names and we had Christian names.

ANDREAS MICHALI - ANGLISIDES VILLAGE – LARNACA.
Kemal was my best friend. He was a great guy. I remember his father was rather tight-fisted and wouldn't give him any money so I would help out where I could and buy him cigarettes and stuff that he wanted. Kemal had the first bike in our village. He taught me how to ride. We would roam the countryside together. We were such good friends. One evening he said to me 'Andrea, let's ride to Scala.' So off we went; it was night-time; eighteen miles each way. He was such a great friend.

ANDREAS PAPANEOPHYTOU – FROM STRONGYLOS, FAMAGUSTA.
During those times there was no difference between the Turkish and Greek inhabitants. We were all Cypriots. We worked together, we danced together and we sang together. At many of our weddings whoever had Muslim friends they would invite them to attend. After all, our dances were the same and when we sang our voices were the same. Our primary concern was to see how we might be able to help each other with our work and the jobs of the village.
I remember playing mupa (football) with my friends Mustapha, Andreas, Ahmet and Giorgos. We played together, we went to each other's house and there was never a reason for us to be separated. Our parents approved and the community was as one. Even when our priest would walk down the road all my friends, Muslim and Christian alike would offer him the same respect and courtesy.
I remember one day when Mustapha was racing around the village on a rather large mule. He was a zizanio (cheeky) like me and he loved to race his mules. Unfortunately something happened and the mule tripped and Mustapha was thrown from the animal and crashed onto the stony path. His hair was pulled back from the skin to reveal a bloodied scalp. He was hurt very bad. The Mukhtari who had the only vehicle in the village drove the boy to the doctor. The mother of Mustapha besotted by grief for her son grabbed some oil and rushed straight to our church to light a candle and pray to the saint Agios Spyridonas. The boy was saved and when he returned to the village, his mother made a point of tell everyone that it was the saint that saved his life.

DIMITRIS DIMITRIOU – LAPITHOS VILLAGE
When I was growing up I couldn't tell the difference between the Turkish and Greek Cypriots in the village. We were all the same. We grew up as one family. One family. We were poor, and we all worked hard. Our parents were illiterate so they worked hard to send their children to school.
I made friends with Muslims. I remember my classmates Mehmet, Adnan, Ertan Oz and Salih. These were my friends. If they had Bayrami we went. When we had Pascha they came to ours. We were always together. We went to each other's weddings too. No one said or cared if you were Christian or Muslim. I am Dimitri: you are Sait. That was the way it was.