Tales of Cyprus from another time: When we had not been divided… (Part B) 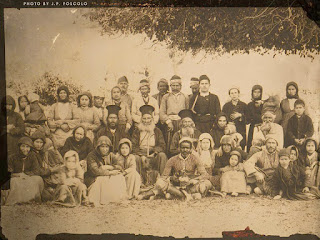 Tales of Cyprus from another time: When we had not been divided… (Part B)

Constantinos Emmanuelle who created `Tales of Cyprus` on the internet has compiled stories from our good friends Huseyin Halil and Christalla Avgousti who have been going around the island, compiling stories from our past on RIK2 in their wonderful programme called `Under the Same Sky`… Constantinos Emmanuel says:
`The following transcripts are taken from video interviews conducted by my friend Huseyin Halil for RIK2. Huseyin and his film crew travelled around the island interviewing elderly Greek and Turkish Cypriots to find out how the two communities co-existed before 1950. I am grateful to have been allowed permission to translate some of these interviews into English for Tales of Cyprus.
Needless to say, I am not surprised to hear the heartfelt confessions of these elderly Cypriots who recall a time of bliss and unity. The one common and resounding 'truth' revealed by each person was that there was once a time in Cyprus when Muslims and Christians co-existed without malice, prejudice or discrimination. "We were like brothers," is a reoccurring statement.
Anyway, enough from me – I'll let you read these living memories for yourself.
(Please note: The word Turk or Turkish in these transcripts refers to Cypriots who are Muslim).

LOUKAS ANDRONIKOU – DROMOLAXIA VILLAGE, LARNACA.
My football team had some great players. We had Nazim Ali, Huseyin Alaman, Zekai and Mustafa. We played together united as one big happy team. There were no issues. My friend Nazim Ali once played in a Greek theatrical play and he was so committed to his role that he was able to learn his lines and spoke them in perfect Greek. They loved our traditions and we loved theirs. We were the same.
My father used to tell me that in the olden days there was a little kafenion that belonged to the Hala Sultan Tekke and they had coffee, sugar and a coal-based stove that was always alight. The kafenion owners allowed Christians any time to come and use the stove to make their own coffee without any discrimination. There was such open φιλοξενία (hospitality) back then.

NINA ANDRONIKOU – DROMOLAXIA, LARNACA.
I was born in the Turkish Mahala (neighbourhood). I grew up amongst the Turkish Cypriots until I was twenty years old. We got along so well, I mean extremely well. I didn't think to go and play with the Greek Cypriots in the village. All day I was with the Turkish girls: to play, to run. It was a joyous time for me. What can I tell you? We were never apart. I remember them all even today. There was Hatice, there was Neriman, and there was Havva. We were together all day – all day.
I remember going to their weddings. We would all sit together in a large room – all women and the violinist would play his tunes. The violinist had to be blind. He wasn't allowed to see the women. It was a room full of women and the bride would be there all dressed up and looking beautiful. There were women painting the bride with henna. We stayed in that room for three days. Each night the bride would wear a different dress. The first night her dress was rose coloured, the second the dress was blue and the last night her dress was white. The men were separated from the women. They would all be celebrating at the kafenion with their brass instruments and their drums.

PANAYIOTA SOLOMI – KOMI KEBIR VILLAGE, FAMAGUSTA.
From the time we were toddlers we used to pay together with the little Turkish children in the village. My friend was Serife. My father worked with Ibrahim and they were like brothers. We never had a problem. We never - we never had any ill feeling towards our Turkish neighbours.

PANAYIOTIS KKLOS – INIA VILLAGE, PAPHOS.
I finished primary school in my village of Inia in 1945. My mother, who was a widower raising seven children could not afford to send me to the gymnasium (high school) in Ktima. I was destined to become a shepherd. My papou Haralambos however (God bless him) felt pity on me and arranged to send me to a Turkish school in Arodes. So barefoot with my donkey we travelled together to Arodes where we met the schoolteacher Mustapha. The schoolteacher accepted me into his classroom without any hesitation. He sat me at the front of the class next to a boy named Ahmet. At that time, Greek language was not allowed to be taught in Turkish schools but the teacher would still translate the lesson into Greek just for me. Little by little I was able to speak Turkish and in this way completed all my lessons with high marks. My classmates had accepted me from the start and they all loved me as I too loved them.

NICOS CHRISTOU - PENTAKOMO VILLAGE, LIMASSOL.
We lived together very well indeed. We didn't have any problems. If anyone visited the village they couldn't distinguish who was Turkish and who was Greek. I'm telling you - we looked and acted the same. They spoke our language the same as us; exactly the same. There was no difference. We were like brothers.

STELIOS CHRISTOU - PENTAKOMO VILLAGE, LIMASSOL.
I had many Muslim friends. There was Kemal, Turan, Beyzade and Hasancik. With little Hasancik we used to play-wrestle for the amusement of the elders. We would all sit in large holes in the ground, eating together, talking and even sleeping together in the great holes with our flocks of sheep nearby.

KATERINA PATSALOU - PERISTERONA VILLAGE, PAPHOS.
We were no different. Whenever the Turkish women had milk they would bring me fresh anari (ricotta style cheese). When they had watermelons, they would always give us some. We got along very well. When my neighbour was baking bread, she would call me to her house to eat with her. We were the same. We shared so much together. At night if I were walking with other girls along a narrow path, the Turkish men would lean against the wall to allow us enough room to walk past them without difficulty. No, no my friend we got along very well. I didn't meet anyone back then who had a problem with the Turks.

KYRIACOS ELETHERIOU - PERISTERONA VILLAGE, PAPHOS.
My father used to build houses for the Turks in the village. At that time, there was no money and he was struggling to buy equipment and materials. A Turkish friend by the name of Mumtaz loaned my father 200 pounds to buy a machine that he needed. With the amazing generosity of the Turk, my father was able to continue to build his houses. Two hundred pounds was a lot of money back then. My father would have had to sell a property or go into debt to get that sort of money. Thanks to Mumtaz however he did not need to do this.

CHRYSTALLA LOUKIA – ASOMATOS VILLAGE, LIMASSOL.
Let me tell you a story. When I was very small my parents became very ill and were sent to hospital. My eldest sister who was ten at the time had to look after the four of us children. It was our good neighbours Abdullah and Hatice who stepped in to help us. They killed a rabbit and helped my sister to prepare a meal to feed us. You can't forget these acts of kindness.

GIANOULLA VRONTI – AMBELIKOS VILLAGE, LIMASSOL.
We got along extremely well with our Turkish neighbours. I remember as a child going to watch the Karaghiozis puppet theatre at the kafenion. We all sat together, Christians and Muslims. You couldn't separate us. There was no other entertainment in those days. It was only later when we would discover the cinema.

AFRODITI ARISTARHOU – KALAVASOS VILLAGE, LARNACA.
We got along 'μια χαρα' (fine) with our Turkish neighbours. There was so much trust between us. My father's friend Halil would place my sister and I on his donkey to accompany him to his fields whenever he was sowing or threshing. Two little girls on a donkey. He brought his bulgur wheat so we could cook for him.

THEKLA SAVVA – KALAVASOS VILLAGE, LARNACA.
My husband once was trapped under a wagon and Turks came to rescue him. They brought him to my house half-dead and every day they would come past to check on him and to see if I needed any help: such good people. Even our own people didn't care as much. We were like brothers and sisters. There was one man Sevket. What an amazing man he was: such kindness towards my family. He would see my children walking to school and he would shout 'Dorothi, Rena, come and let me give you an ice cream.' He would never accept payment. Never. At my own wedding we had a Turkish koumbaro (best man). We danced together. Brothers I tell you. I can't tell you how well we all got along.