The Turkish Cypriot artist who created the flag of Cyprus: Ismet Guney… 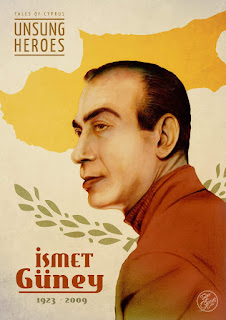 The Turkish Cypriot artist who created the flag of Cyprus: Ismet Guney…

END NOTE:
I'd like to offer my special thanks and gratitude to Nilgun Guney for her help and support in writing this short tribute to her father.
If anyone knows anything else about Ismet Guney or was in fact one of his pupils, please, please add your comments to this post. You may also if you wish, send me an email: conemmanuelle@talesofcyprus.com
Many thanks,
Constantinos (Costas) Emmanuelle
TALES OF CYPRUS
www.talesofcyprus.com "

Photo: The poster created by Costas Emmanuelle in memory of Ismet Guney...

(*) Article published in the POLITIS newspaper on the 27th of August 2017, Sunday.
Posted by Sevgul Uludag at 8:26 PM