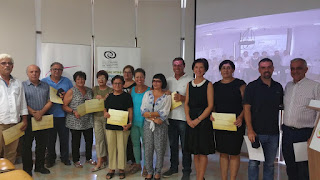 After meeting a few times and making various proposals to the Turkish Cypriot and Greek Cypriot political parties meeting for years every month at the Ledra Palace Hotel under the auspices of the Slovak Embassy, they had decided to honour the Turkish Cypriot and Greek Cypriot relatives of "missing persons" who work together in their joint association "Together We Can" as well as supporters of this association…
We held an event at the Home for Cooperation on the 4th of August 2017, Friday where I made a presentation of the members and supporters of this very unique group in Cyprus who have overcome their own pain and made a further step for humanity by trying to heal the wounds of our communities, by trying to collect information on other "missing persons" and all without any local or international funding… I salute them for their humanity on this island…
The Slovak Ambassador Oksana Tomova pointed out that the voluntary humanitarian work of this group could be a role model not only in Cyprus but to the world on how tragedies in a conflict should be handled… Christos Efthymiou and Erbay Akansoy, speaking in the name of `Together We Can` pointed out how important it is to find out the truth and that this was only the beginning in the search for truth… Efthymiou said:
"We are now in a most difficult stage of the efforts to find a solution of the Cyprus problem. As relatives of the missing and victims of conflict and war we urge you, that in all your deliberations on issues of power sharing, on territory, on return of property or reparations, to please consider what can be the remedy for the loss of life. For all relatives, there can be no other remedy than a peaceful future for the generations to come, so that no other family will go through what our families have gone through all these years."
Here is how I presented them at the event honouring them for healing the wounds of our communities:
"We are honouring the voluntary work of the members and supporters of `Together We Can` - The Bicommunal Association of Relatives of Missing Persons and Victims of War for their insistent and consistent humanitarian work for the past eleven years on healing the wounds of the traumatised communities of Cyprus and for working voluntarily to gather information about `missing persons` in Cyprus.

Photo: Members of "Together We Can" who have been honored at the event...