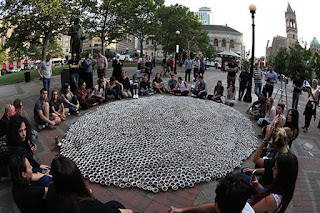 OUR CONSCIOUSNESS
Between research, interviews, and developing the concept of her work, Sehovic's "STO TE NEMA?" ("Why are you not here?") was nearly a year in the making, but would be one day in the final production. She made logistical preparations in Bosnia during a six-week leave from her staff position in UVM's Registrar's Office, then on the morning of July 11, 2004, Sehovic set to work on her installation in the square in front of a Sarajevo mosque. A bed of soil, 30 meters across, depicted a map of Bosnia and Herzegovina. At the eastern edge in the area of Srebrenica, 989 cups were set out for each of the residents whose bodies had been identified and re-buried to date. Most were filled with coffee, brewed on-site. Forty-four cups held only sugar cubes representing those under age 18, too young for the ritual, who had died; a single rose represented the one female victim. In a burlap sack at the side, an additional 338 empty cups stood for the individuals to be buried that day in Srebrenica. Three tape recorders embedded in the soil ran tape loops of Sehovic reciting the names and birthdates of the dead.
For the artist, collecting the cups (fildzans in Bosnian) was an important part of both process and product. Many came from Bosnian families in the Burlington area, where Sehovic, her parents and three sisters immigrated in 1997 following previous stays in Turkey and Germany. Many came from residents of Srebrenica and neighbouring areas, some who lost family in the massacre. One woman gave her a cup that had been in her family for 40 years. Considering the participation of so many in the work, Sehovic says, "It is not my project, but our project, our consciousness."
Sehovic says her ultimate goal was to create "an experience that is moving and powerful." Her snapshots of the day include photos such as the one of a woman with a child by her side, kneeling to hear the recitation of names, tears in her eyes; a journal of visitors' reactions includes comments in 13 languages. Sehovic estimates approximately 2,000 saw the exhibit, and many more learned about it through extensive media coverage in Bosnia. "It was a very overwhelming experience," Sehovic says. "It was good for me, as an artist, because I could see that it actually worked. But it is a very sad project."

BRIDGE OF UNDERSTANDING
Professor Kathleen Schneider's 3D- design class was a pivotal moment for Sehovic as an undergraduate, expanding her view of what art could be and leading her to major in studio art. The professor remembers Sehovic as "a risk taker, so willing to experiment." A research project in Schneider's class introduced Sehovic to Colombian sculptor Doris Salcedo, whose work focusing on the tragedy of the thousands "disappeared" in her country resonated with the young Bosnian artist. Sehovic began to explore similar themes with Schneider's guidance during her undergraduate years, including her John Dewey Honors Program senior project, an installation titled "Tree of Life."
Sehovic is hoping to extend the reach of "STO TE NEMA?" with subsequent July 11 installations, the number of coffee-filled cups growing as more bodies are discovered, identified, and laid to rest. She's also working on final edits of a video shot by Gates Gooding, a UVM senior. With assistance from URECA! (a UVM undergraduate research grant), Gooding travelled to Bosnia to film and assist in Sehovic's work and create his own film about Bosnian youth.
Sehovic envisions creating two final versions of the "STO TE NEMA?" video —one for Bosnian viewers and one for Americans-and is hoping to screen them at UVM later this year. "A project like this is a way of healing for Bosnians, coming to terms with this terrible thing that happened to us," Sehovic says. "And for Americans it is building a bridge of understanding where Bosnian people are coming from, because it is very hard to talk about these things."…"

(*) Article published on the 13th of August 2017, Sunday in the POLITIS newspaper.
Posted by Sevgul Uludag at 6:58 PM