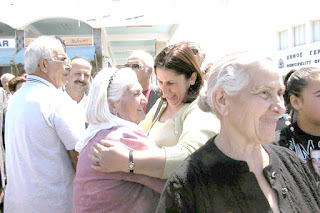 "Two friends we lost in the area of Mavrali in Paphos: Arif Ruso and Ihsan Kilich…"

Ulus Irkad remembers two of his friends whom he lost during the war in 1974 in the area of Mavrali in Paphos… He says:
"On the 20th of July 1974, in the Mavrali area of Paphos we lost two of our friends… One of them is Arif Ruso. He was going to the frontline with an artillery. We had a draw and the person who went with him also lost some of his fingers… The other friend was Ihsan Kilich… He had come from England to see his wife and his three-year-old son. Due to the war, he ran to the military posts… Just before the war, I had said to him, "Today you look very handsome…" And he had replied "I am always handsome…" That was it… A few hours later he would be shot… And unfortunately where his father fell in 1964 and died, he too died in the same place as his father in 1974… We were together with both until their last moments… May they rest in peace… May there be no war again I say…"

Photo: When Greek Cypriots and Turkish Cypriots of Paphos meet...
(*) Article published in POLITIS newspaper on the 1st of September 2019, Sunday. A similar article was published on my pages entitled "Cyprus: The Untold Stories" in the YENİDÜZEN newspaper on the 26th of July 2019 and here is the link: