Wise words from Joseph Kassapis that fall on deaf ears… 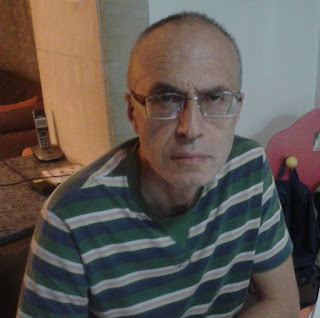 Wise words from Joseph Kassapis that fall on deaf ears…

I discovered Joseph Kassapis on Facebook and I was simply amazed with his wise words… Every few days, he would write something that would make me want to publish everything he wrote so that more people would read them and hope that his wise words would not fall on deaf ears…
I want to offer a glimpse into his thinking and writing – as Cypriots, we are lucky to have people like him since it calls on wisdom rather than falling into the trap of the `nationalisms… It opens your eyes and invites you to think, to think differently, to use your brains in order to see what has been going on in Cyprus… Here is some of Joseph Kassapis writing on the wall – his wise words falling on deaf ears… Let me quote Joseph Kassapis here:
"The idea of my whole life being lived in / in the shadow of the Cyprus problem ... and Ending joylessly without the final relief of seeing the Day it will End, after seeing so many loved ones pass away without this consolation for their life-long troubles courtesy of the "Cyprus Problem", is getting more terrifying as the possibility gets more and more likely. I have done nothing wrong to, and did everything right not to, deserve this. I loved Cyprus and respected all Cypriots irrespective of ethnicity (- for me they are all firstly and mostly, and increasingly only, Cypriot), abhorred and condemned violence from all sides, was law abiding, harmed nobody and condemned harm on anybody, upheld and defended democracy, was loyal to Cyprus, ... I did nothing to deserve this, the Cyprus Problem. It is others who erred and offended, committed the crimes and caused the consequences. Why am I bearing them? I, and so many innocent others like me."

WHAT DIFFERENCE IT WOULD HAVE MADE…
"When you think what difference it would have made if the Cyprus Republic had had the seriousness, the sense, or the guts - not sure which one (more than the others) - to punish the First Greek Cypriot who harmed the First Turkish Cypriot; or the Second; or Third; ... or 100th; ... or 1000th.
What tremendous difference in the way it would think of itself and we & others would think of it; to its self-confidence, its credibility, its moral standing. To TCs' confidence and trust in it, acceptance of it; their feeling of security, of self-worth as citizens, of their being valued as equal citizens, considered by the State as the equals of GCs. To (the Credibility of) Turkey's claim to fill the void: to be protectors of those the Republic utterly, abysmally failed to.
If only as a society we had the Guts ... Which of course pre-requires Will. Which in turn requires Understanding. Which takes us back to ... what we ultimately seem to want (lack): QUALITY.
If only ..."

VISIT TO KORMAKITIS…
"When last weekend I visited my northern village of Kormakitis close to the cape bearing its name and went on a walk with a brother and cousin at a fantastic spot along a wooded ridge overlooking the sea on both sides (about where the distance between Cyprus and Turkey is at its minimum) just after a strong shower that left the sky extraordinarily clear in late afternoon soon progressing to early evening as the sun set and darkness fell, the lights of what must have been villages on the slopes of the coastal mountains on the Turkish mainland opposite were not all that dimmer from the exceptionally bright ones shimmering on the Akamas peninsula across the Morphou bay.
So close!
Yet their reality, or significance, had so remarkably been totally lost about 60 year ago on the mindless fools and fanatics who, on taking unilaterally the fate of Cyprus upon them, behaved as if those massive mountains and the massive country and people and army behind them, with their massive keenness and eagerness and readiness, and ability - shrouded with a legal right or ground or claim or argument or excuse - to pounce and end forever life on the island as we knew it, did not exist. It could well have been a clear night like that, with the lights across the northern sea showing as if within a stone's throw, when very close to the very spot where we stood a bunch of some of the worst of these brainless patriots had exterminated the whole of a large peaceful TC family - minus the mother who survived to tell the story - to further their pure Greek Turkey-blind vision for our multi-ethnic island. [Note: Those poor TC sheep tenders were not to be their only or last victims; they effectively were also the killers of the bunch of innocent GCs from the area that the TCs executed in cold blood shortly after the Turkish army arrived at my village (-that is, apart from any other TCs they may have gone on to kill later, or killed before; and any other GCs the TCs may have killed in reprisal)].
They played with fire like no children ever did or could. They pushed with unimaginable recklessness for the most elusive, most remote, most nebulous, most doubtful vision ignoring, failing to see, the biggest, closest, most concrete, most unmistakeable reality dominating the landscape- the mammoth in the room. They knew or must have known Turkey could and would come, and if it came it could not be stopped and ever be made to leave. Yet they proceeded happily to do EXACTLY AND ALL OF WHAT TURKEY NEEDED TO COME. And to come in a way and on a basis that few if any outsiders would substantively question.
So absolutely clear, the gigantic danger, the risks. So absolutely corresponding the blindness to them, the oblivion of the people in question.
Must have taken a hell of a blinding force. NATIONALISM!"

COUNTRIES AND "COUNTRIES"…
"Germany last week convicted a 95-year-old for serving as a mere lowly guard in a WW2 concentration camp 3 quarters of a century ago. A self-respecting State, learning lessons from its disasters. Punishing those who harmed it, even though the harm they caused it - at least the material, tangible part - has by now been fully repaired.
Cyprus the last half century plus has not convicted, tried or even investigated, or even questioned or stigmatised in any way, its destroyers- from top instigators and leaders down to the lowest/last/least EOKA B terrorist; far from it, it rewarded many of them, especially the ring leaders, with massive rewards. Even though the harm caused was total and totally irreversible. A pseudo-state, lacking self-respect, and incapable of learning…"

ABOUT "HERO-FICATION INDUSTRY"…
"Our thriving Hero-fication Industry's depressing explanation: our severe Depression about Us.
It may seem to some - this constant proclaiming of more and more of our own, mostly once dead of course, as Heroes - a harmless part of our celebrated propensity for excess. It's not. It's much, much worse. Its causes, sources, explanations and motives, are several, all unflattering. Here are some:
First, it's another expression of our beloved national sport: self-elevation. A people with so many heroes is a heroic people ... (true to its gloriously heroic ancestry).
Secondly, it's a cunning device of a class of people who caused, did not lose and often profited from our national catastrophe to placate and cajole and pacify the victims and/or their families, to check and forestall any thoughts and tendencies of seeking justice to be done.
Thirdly, it implies that the other side - the opponents of Heroes - are Villains. That we are the virtuous side in the Right, and they the vicious side in the Wrong.
4th, partly covered by the previous 3 (especially 1 and 3), it helps obscure our guilt for terrible crimes, AND - AS IMPORTANTLY IF NOT MORE - our guilt at turning a blind eye and never punishing those crimes.
5th, (also overlapping with some of the aforementioned), it shows our inability and/or unwillingness to acknowledge the merciless universal law of association between Cause and Consequence. Desperate to avoid the Death being a Wasted, Needless, Avoidable, Pointless death caused directly by our actions, we call them Heroes, implying a totally different context and manner and purpose of death. Attributing value to the death, when there is none.
6th, it perpetuates the divided status quo, encouraging our people to vote No to any proposed Solution plan, convinced it's grossly unfair (reawarding the Criminal side for its crimes against the Heroic side), and creating a revulsion making it seem and feel inconceivable to coexist - as Heroes/Victims - with the Villains/Perpetrators.
7th, (also overlapping with ... above), it helps ensure the elite is left free to enjoy its vast corruptly obtained riches and privileges, while the working classes are distracted ... chewing on the bone of "hero" thrown their way ... happy to go on living on (false) honour.
8th, the hero proclaimers honour themselves through honouring others; in the sense that the confer-or of an honour, as giver, is in the party in the superior position relative to the conferee.
9th, the awarder also profits in more tangible, material ways, like ... VOTES; expecting a return of favours from the award-ee and his family/circle.
10th, political parties use as a tool to keep the faithful loyal. Awarding honours to buy loyalty.
11th, ... simply low IQ.
At least low, critically low, on critical parts/aspects of it (IQ).
Lastly, and Most, rather than Least:
Out of our severe Depression about us, our mess. Pretending to think the most of ourselves when we in fact think least; when we know very well Who We Are, and how Who We Are brought us to Where We Are ...
Trying to hide our extremely low self esteem ..."
And last, a comment about why he tries to analyse:
"I do try to analyse. And reason. Strong views, but always backed by arguments. With which one can agree or disagree. I hate Half Truths and hypocrisy. Especially about what has ruined our country, and especially from those who did the ruining. And there is a hell of a lot of it ..."
Thanks so much dear Joseph Kassapis… You create wisdom and hope on this barren land full of pretence and hypocrisy… Thank you for who you are and for speaking the truth… We are grateful for that…

(*) Article published in the POLITIS newspaper on the 20th of January 2019, Sunday. Part of this article was published on my pages in YENİDÜZEN newspaper in Turkish called "Cyprus: The Untold Stories" on the 30th of November 2018 and here is the link: