Israeli and Palestinian relatives of missing and victims of war working together: “The Parents’ Circle: Families’ Forum…” 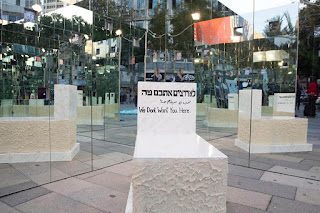 Israeli and Palestinian relatives of missing and victims of war working together:
"The Parents' Circle: Families' Forum…"

Today I want to share with you the story of Israeli and Palestinian relatives of missing persons and victims of war working together… They have formed the "Parents' Circle: Families' Forum" where they get together and talk about their loss and do things together… Their common pain unites them for their common future… I have been following them and writing about them for some time and today I want to share with you what they think and what they do… According to Caitlin Bolnick writing for the Jewish Boston website, over 600 families who have lost a close family member as a result of prolonged conflict are working together at the association they have formed called `The Parents' Circle`…
Caitlin Bolnick writes:
"They have dedicated their lives to fostering peace and coexistence between Arabs and Israelis, with a focus on reconciliation and the creation of two states for two people.
We were fortunate to be able to sit down with two of their members, Bassam, a Palestinian and Robi, an Israeli. Bassam and Robi both lost children. Through their grief, they have worked tirelessly to advocate for reconciliation, peace within the region, and global awareness.

Q: I'm sorry to hear about your loss. How did you lose your children in the conflict?
Robi: David was a student at Tel Aviv university. He was a doing his master's and teaching philosophy and education. He was part of the peace movement. He didn't want to serve in the occupied territories. And he came to see me and said if I don't go, what happens to my students? He was teaching to kids who were being inducted into the army. He went. When the army came to tell me that he had been killed, the first thing I said was you may not kill anybody in the name of my child. A little later I came across a Palestinian that David had asked to see his papers. When he found out that David had been killed he was sorry to hear. This is the essence of all of the work we're doing. When you experience each other's humanity, that's how you end this conflict. That's what we call an emotional breakthrough.
Bassam: In the 16th of January 2007, Israel Border Police shot and killed my daughter in front of her school. Two days later she passed away in the hospital.

Q: How did the two of you find each other given the cultural, religious, ideological barriers?
Robi: I had met Bassam in a demonstration when we were trying to get the police to open an Inquiry. I went to the high court for Bassam when we didn't even really know each other that well. But then, we started to travel and we've been travelling together for something like five years. We've been all over the world together. I would want Bassam to be the mediator with the man who killed my son if that's any indication of how I feel about him.

Q: What do each of you think about the current efforts – or lack thereof – to make peace? Do you think a lasting peace between Palestinians/Israelis can be achieved with Netanyahu and Abbas in their current positions?
Bassam: We have no doubt that one day we will have peace. The problem now is that we don't have strong leadership, especially in Israel since they control [the territories]. They aren't ready to pay the political price. We will continue to work together until leadership follows us to achieve peace between our people.
Robi: I hardly can see the way that things are going now that there can be a constructive dialogue. And maybe that's one of the reasons to have a strong, on the ground movement toward peace. The Parents' Circle can be a catalyst for change. One of the things that we really believe in a long-term vision – a conciliation framework as an integral part of any peace agreement. Or else it's just a cease fire until the next time. More than ever, support must be given to groups on the ground pursuing peace. We cannot continue the cycle of violence.

Q: How is The Parents' Circle perceived in your respective communities?
Robi: We have a certain standing in our community. After all we've paid a very high price. Of course, there are people who do not agree with us, including other bereaved parents but we will not give up. Especially because we are so convinced that we have to find a way to reconcile. It doesn't mean that we have to love each other, but what it does mean is that there has to be some respect. Some kind of project where we can admit to each other's crimes. It would include reparations, admission of crimes. Nothing here is one-sided. Of course, there are people who don't agree with us in Israel and Palestine. I went back to South Africa to make a film about peace and we went to look at the Truth and Reconciliation Commission. Of course, Israel and Palestine is not South Africa. I think that in the long run, the hatred in South Africa was no more or less than what is happening in Israel and Palestine. If we can't reconcile, we might as well leave because there's no point.
Bassam: We have a respect for the people who pay the highest price, so we (Parents' Circle) have credit in our society. People listen [to us] and respect us. We have the right to speak and even though people might not agree with us, we feel safe and respected.

Q: I read a poll that said majorities of Israelis and Palestinians support a two-state solution. What do you think has to be done so that the popular will is heard by the political leaders on both sides?
Bassam: We need to share this land as one state, or two, or five. Otherwise, we will share our land as one big grave. Israel will need to finally have their own borders. Palestinians will need to finally have their own land.
Robi: Perhaps we have to get divorced to have to get remarried. It's very important that people will understand what will happen if we don't have a 2-state solution. Of course, in an ideal world a one state solution would be an ideal solution. But we don't live in an ideal world. People tend to forget why the State of Israel was created in the first place. It's very hard for people who live in Tel Aviv – the bubble – to know what's going on in the Occupied Territories and they need to know.

Q: What happens if the status quo continues?
Bassam: For more than 100 years, we've been using violence. Both sides are still not safe. We need to change our ways to accomplish our goals. Let's try non-violence for 50 years. I look at my children now joining peace movements and it is like a dream. On the ground, according to our activities, every day we have this hope and belief we are on the right path. Today we have over 600 people as part of The Parents' Circle. Even if we cannot change the situation, we will not let the situation change us. This mission has become our life.
Robi: If it continues the way it is, I think eventually there will be no Israel. It's just a question of time.

Q: What advice do you have for anyone who is struggling with forgiveness–who is still thinks revenge equals justice?
Bassam: If you want to take revenge, it's up to you and your choice. But if you want to take revenge, you must be prepared to die. For those struggling with forgiveness, you must first make peace with yourself and release yourself from the victim mentality. We are bigger than our pain and we are more than our sadness. It's very dangerous to be stuck in the painful prison of the past. Forgiveness is in fact my revenge. When you forgive your enemies, we let him go back to his roots- his humanity. If you take forgiveness as a way of life, you will see that you will live a life of peace both with yourself and others. For the religious people, our prophets forgive their people and those who try to harm them in all religions. Our prophets want to teach their followers that we can forgive just as they did.

Q: Can you tell us a little bit about what you both have been working on most recently?
Robi: We created a project called Steps for Peace: www.steps4peace.org. We travelled a lot in the West Bank and found Palestinian women who made embroidery and they couldn't afford good materials. It was sold for low prices and bought largely out of pity. We wanted to do something about that. We worked with a school in Tel Aviv and created an embroidered bird. We then took that bird and put it on shoes. We took it to New York and gave the shoes to Barbara Streisand and Meryl Streep and Cate Blanchett. We thought this would be a wonderful way to give incomes to Palestinian women, to support our message and to help the women's school. We launched it at the European Parliament in June. It was in Congress on International Peace day on September 21.

Q: Could you share any particularly hopeful anecdotes from the Parents' Circle for us?
Bassam: Every day we have a new story that gives us hope and more power to continue our mission. We had a Palestinian mother who had lost two sons. She was so angry that she couldn't even see Israelis/the other side as human. She participated The Narrative Project and told her story and she noticed the Israeli mothers start to cry when she told her story. One of the mothers got up and went to hug her. She was shocked. She never expected that to happen and with that she began to understand that there was no difference. She ended up joining the Parents' Circle and became very active."

Photo: "We don't want you here!" installation of families…

(*) Article published in the POLITIS newspaper on the 13th of November 2016, Sunday.
Posted by Sevgul Uludag at 5:22 AM