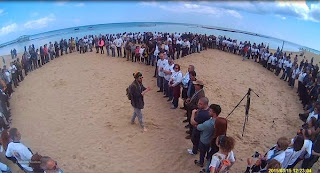 As years go by, the problems of our island are more and more aggravated… Our youngsters are still at military posts and `barricades` with guns on `duty` while young people, just like their grandmothers and grandfathers did 50 or 60 years ago are immigrating to other countries in search of a job… Turkish Cypriots, Greek Cypriots, Armenian Cypriots, Maronite Cypriots who had struggled together once for workers' rights, who had worked together, who had gone to strikes together are one by one leaving the earth… A whole generation who had worked together in the fields, in road constructions, in collecting oranges, in constructions, in shoemaking and who had shared their food for the day, who had been in each other's weddings and funerals are being wiped out from the face of this earth… Those Cypriots who had danced together in weddings, who had sang the same songs in Turkish and in Greek, those Cypriots who had shared the pilavouna and the ekmek
kadeyifi during paska and bayram are going away from this earth… Not only did they speak Turkish and Greek but also English… A generation who knew each other, who respected each other but due to winds of `nationalism` having to take up guns and be on guard against each other is dying… Turkish Cypriot and Greek Cypriot women who had had their morning coffee together as neighbours, who had breastfed each other's babies, who had taken care of kids without discriminating as `yours or mine` are dying… Turkish Cypriot and Greek Cypriot women neighbours who had helped each other during days of conflict, who would hide each other and take care of each other, who would give bread, milk, cigarettes, sugar, rice or whatever there was in the house to each other, who would whisper the dangers to come to each other are dying…
While some Turkish Cypriots and some Greek Cypriots would take up guns and plan provocations, opening the way of the division, the generation who had left their houses crying due to the division are dying…
We remain behind, we heard these from our mothers, fathers, grandmothers, grandfathers, some of it we lived, we experienced… And when we are gone, we know that such memory will no longer exist… This memory is being wiped out and instead another `memory` based on suspicion, enmity and `nationalism` is trying to be installed…
The mentality of people are changing towards `Them on their side and us on our side` and still preventing this, learning from the past and creating a future based on friendship is not allowed – the mentality in both sides is preventing this by trying to silence those who work for friendship and trust on this island.
The reality is that the two main communities of our island, Turkish Cypriots and Greek Cypriots have `limited` contacts. According to a recent poll by the New Cyprus Association 75% of the Turkish Cypriots and Greek Cypriots have no contact with each other. Among other reasons, one of the basic reasons for this is the problem of language… Living `separately` since the last 50 years, our communities can no longer speak each other's languages… The mentality that is prevailing in the northern and southern parts of our island is far from encouraging contact and cooperation… Only 25% that is only one fourth of our communities are in contact with each other. And this is a drastic situation. Because our common memory is being wiped out, those who struggle together for the solution of the Cyprus problem is also very limited…
Six years ago, on the 26th of September 2009, we had got women together in Pervolia at the PEO premises there and had workshops among Turkish Cypriot and Greek Cypriot women… They had developed ideas and had called on the leaders of the two communities… Women supporting a federal solution that would be bicommunal, bizonal, politically equal had said that they wanted a completely demilitarized island where outside interventions would not be possible. They had called on the two leaders to give their support to the victims of war and asked them for those who had committed crimes against humanity to be punished and banned from public life… They had asked the leaders to take steps that would bring our two communities together instead of steps separating them even more and had asked for the easing of the crossings and for opening more crossing points throughout the island… They had asked the two leaders to create infrastructures so that our communities
would learn each other's languages, for more bicommunal programmes in the media and for more cooperation for the interest of the two communities.
Of course as you can imagine, the leadership on both sides would not take such proposals seriously since they have always been after a `blame game` and interested only in a `win-lose` attitude. Unfortunately all they are interested is the `power game` and not really concerned with the needs and worries of ordinary people like you and me. When I say `leadership`, I include `leadership` in almost all areas, not just `governmental leadership` but in all other areas of life…
Therefore they would not be interested in steps to open the path for cooperation among the two communities…
So who will make life better for our communities on the island?
I want to share a poem by a woman from Canada, Oriah Mountain Dreamer, that I have been carrying in my heart – it had empowered me during rough times and kept me going – if only we can be true to ourselves and stop pretending, perhaps we can find the strength to struggle for a better life for all on this island. The poem is called `The invitation`…

It doesn't interest me what you do for a living. I want to know what you ache for and if you dare to dream of meeting your heart's longing.

It doesn't interest me how old you are. I want to know if you will risk looking like a fool for love, for your dream, for the adventure of being alive.

It doesn't interest me what planets are squaring your moon. I want to know if you have touched the centre of your own sorrow, if you have been opened by life's betrayals or have become shrivelled and closed from fear of further pain.

I want to know if you can sit with pain, mine or your own, without moving to hide it, or fade it, or fix it.

I want to know if you can be with joy, mine or your own; if you can dance with wildness and let the ecstasy fill you to the tips of your fingers and toes without cautioning us to be careful, be realistic, remember the limitations of being human.

It doesn't interest me if the story you are telling me is true. I want to know if you can disappoint another to be true to yourself. If you can bear the accusation of betrayal and not betray your own soul. If you can be faithless and therefore trustworthy.

I want to know if you can see Beauty even when it is not pretty every day. And if you can source your own life from its presence.

I want to know if you can live with failure, yours and mine, and still stand at the edge of the lake and shout to the silver of the full moon, 'Yes.'

It doesn't interest me to know where you live or how much money you have. I want to know if you can get up after the night of grief and despair, weary and bruised to the bone and do what needs to be done to feed the children.

It doesn't interest me who you know or how you came to be here. I want to know if you will stand in the centre of the fire with me and not shrink back.

It doesn't interest me where or what or with whom you have studied. I want to know what sustains you from the inside when all else falls away.

I want to know if you can be alone with yourself and if you truly like the company you keep in the empty moments.

Photo: "Oranges in the Sand" peace activity of the Famagusta Initiative and other associations...

(*) Article published in the POLITIS newspaper on the 5th of April 2015, Sunday.
Posted by Sevgul Uludag at 5:32 PM