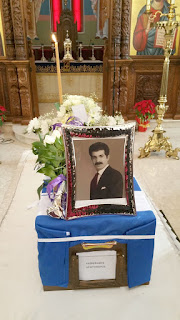 The stones of the castle
have your footsteps.
The wooden door, your touch.
Mute witnesses of a bygone era, father
etched in the memory of all of us
who love you.

I stand high on the castle stones
down below me the beautiful little harbour
same as then
further down Kyrenia,
with Pentadaktylos like a stone sky
covering her
beautiful, unique as always
even if she is changing.

I ask for your hand,
to come down.
I want us to sink together
in the deep blue
and when baptized
to dry beneath the shade
of a blooming fragrant lemon tree.
To embrace you in my arms my love
and to whisper in your ear
«My Kyrenia, you».

We say goodbye to Londos – may he rest in peace now…
I thank all my readers who helped to find out details about the fate of Londos and the relative of a `missing` Turkish Cypriot, Mr. Sozer Ozkaramehmet and the bulldozer operator who showed us the burial site…
May the humanity on this land never disappear to help others and ourselves to create an island without hatred, without suspicions, without bloodshed…

Photo: The small coffin of Londos...

(*) Article published in POLITIS newspaper on the 5th of February 2017, Sunday.
Posted by Sevgul Uludag at 5:19 PM