From Kokkinotrimitia to Nicosia: The stolen life of a young man… 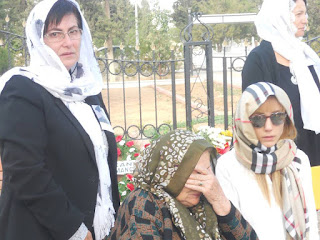 From Kokkinotrimitia to Nicosia: The stolen life of a young man…

Photo: The pain of all relatives of "missing persons" is the same…

(*) Article published in the POLITIS newspaper on the 20th of December 2015, Sunday.
Posted by Sevgul Uludag at 5:49 PM No comments: 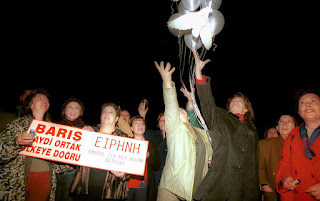 Photo: Fatma Azgin at a peace demonstration (on the right) back in 2001…

(*) Article published in POLITIS newspaper on the 13th of December 2015, Sunday.
Posted by Sevgul Uludag at 6:34 PM No comments: 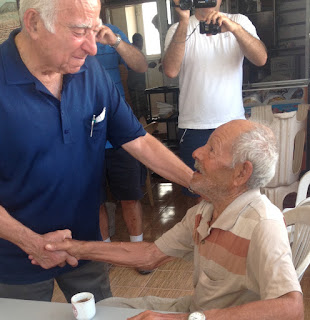 I discover the lovely stories of Stephanie Jacobs on Facebook shared by `Tales of Cyprus` and through a friend, Zoe Piponides and today I want to share with you part of her fantastic research on our island… She says:
`I am currently a PhD candidate in the School of History and International Relations at Flinders University, Adelaide, Australia.
My PhD journey began in April 2013; I was motivated to write the hidden chapter of Cypriot history: that of inter-communality, cooperation and friendship between Greek- and Turkish-Cypriots.
My topic was inspired by the loving friendship between my Greek Cypriot pappou (grandfather), Costas, and his Turkish Cypriot best friend, Mehmet. Pappou Costas continues to provide me with inspiration through his love and thirst for knowledge.
Title: Memories of a Cypriot Belle Époque from Cyprus and Australia; intercommunality from the 1930s to 1950s.
My grandfather moved to Australia in 1947 but before then, he lived in Agia Irini, a harmonious, multi-ethnic village in the Kyrenia District in the north of Cyprus. He told me stories of how he and his brothers would play with Turkish-Cypriot children, that it was common to speak both Greek and Turkish, embrace each other's cultural and religious customs and attend each other's events. This was normal life in Agia Irini, and many parts of Cyprus, until civil unrest broke out in the mid-1950s.
The aim of my interdisciplinary dissertation is to record and examine, first hand, oral history accounts of the relationships between Greek and Turkish Cypriots in several former mixed villages of Cyprus, before civil unrest broke out on the island. My study uses interviews conducted by myself, of elderly Greek and Turkish Cypriots in Cyprus and in Australia, which capture their childhood and early adulthood stories from several mixed villages, to explore Christian-Muslim relations in Cyprus from the 1930s-1950s. So far, I have conducted 24 interviews in Australia, spanning 6 different states and territories, and 40 interviews in Cyprus, spanning the north and south.
The four central research objectives are:
1. To capture and explore the childhood and early adulthood stories of friendship and intercommunality of those Greek and Turkish Cypriots who lived in mixed villages of Cyprus during the 1930s-1950s;
2. To investigate the experiences of the Cypriot diaspora in Australia, how each group settled and with which communities they engaged;
3. To examine how the memories of the 1930s-1950s differ between Greek and Turkish Cypriots, between those who migrated to Australia and those who stayed, and between those who migrated to Australia before civil unrest erupted in Cyprus, and those who lived through the civil unrest and migrated later;
4. To understand how religious, ethnic and national identities formed and evolved amongst Greek and Turkish Cypriots in both Cyprus and Australia.
On May 20th 2015, I flew to Cyprus to spend two months conducting interviews of Greek and Turkish Cypriots from three formerly mixed villages, spanning the north and the south of the island. One village (Akdeniz, formerly Agia Irini) had a Turkish Cypriot majority; another (Polis Chrysochous) had a Greek Cypriot majority, and the third, Alaminos, had close to a 50/50 split throughout the 1920s-1960s…`

And here is one of her stories that was shared on FACEBOOK that I want to share entitled "A loving encounter in Northern Cyprus":

(*) Article published in POLITIS newspaper on the 6th of December 2015, Sunday.
Posted by Sevgul Uludag at 4:45 PM No comments: