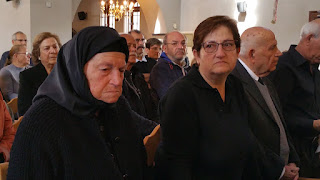 Photo: Christina and her mother Panayiota at the funeral...